Please provide your zipcode to see the available trees.

Arapaho Blackberry Plants grow to about six feet tall and four feet wide. They like full sun to partial shade, slightly acidic soil that drains well, and medium watering. Arapaho Blackberry Bushes are best suited for planting in USDA Zones 4 to 9, and can tolerate high heat. The two-year-old canes bear fruit, and the plants can be grown in the ground or in large containers. If you would like to add a thornless Blackberry to your edible landscape but live in a warm climate, then the Arapaho Blackberry is a great choice.

The 20 liter size is planted in an EverPot™ on a trellis, ensuring your blackberry plant will not become rootbound. It fits perfectly in our 6.5 Decorative Pot.

Plant Arapaho Blackberry Plants in early spring when there is no longer a chance of frost. Space Arapaho Blackberry Plants four to six feet apart, and clear the ground of grass, weeds, and large rocks in a three to four foot circle around each plant. Prepare a hole that is twice the size of the plant’s potted root ball. Fill the hole with water and allow it to drain. If the hole does not drain fully after two hours, then increase the hole size by six inches on all sides and backfill with a mixture of soil and ten to fifteen percent perlite for drainage.

Position the new plant so that the soil surface of the root ball is even with the ground surface, refill the hole with soil and compost, and water in well. Water newly planted Arapaho Blackberry Plants once per week until new leaves begin to grow. When the plants are established and growing canes and leaves, you can reduce watering to once or twice per month, or when the soil is dry down to two inches deep at the plant’s base. In high heat summers Arapaho Blackberries may need more frequent watering. Water with a soaker hose and avoid constantly saturating the canes and leaves.

You can begin harvesting Arapaho Blackberries as soon as fruit begins to turn dark red to black. The ripest berries are a deep, shiny black and should be picked for eating fresh. Slightly less ripe berries are fine for making preserves and baking, but very young, red berries are quite tart and less juicy than fully ripe fruit. Pick by hand and store harvested Blackberries in a vented container in the refrigerator for a week or more. Blackberries can also be frozen for later use. 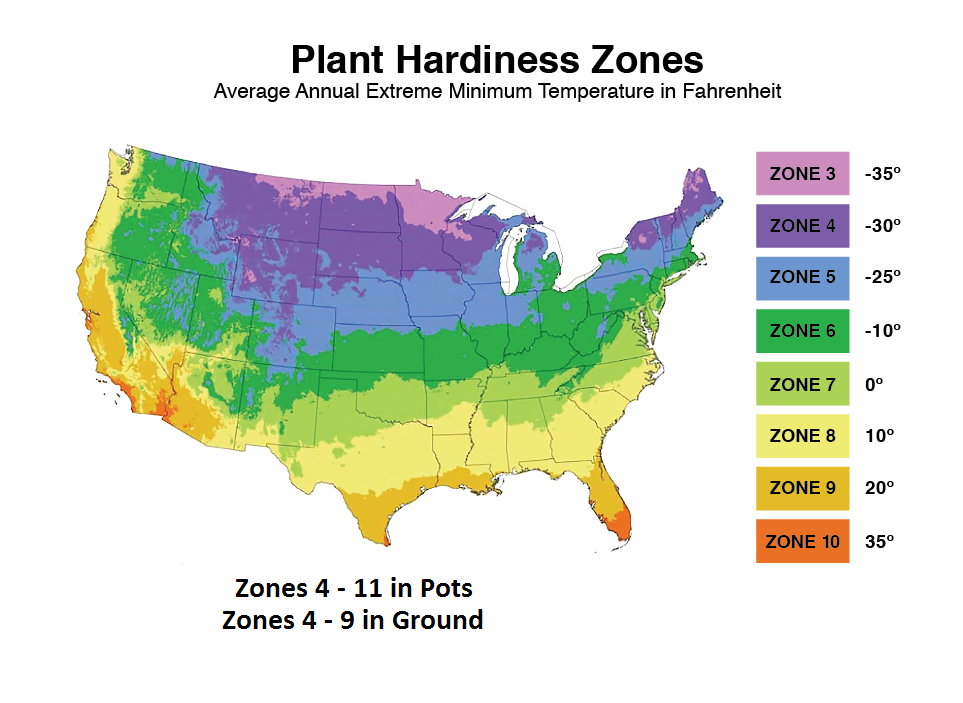 Mulch Arapaho Blackberry Plants with three or four inches of hay, leaves, or pinestraw. Add mulch from the plant base out to about four feet to cover the ground around each plant. Mulch helps prevent weeds, retain moisture, and protect roots from both harsh cold and heat. After all Arapaho Blackberries have been harvested add a thicker layer of mulch (six to eight inches deep) to protect the roots through winter.

Where can I grow Arapaho Blackberries?

Arapaho Blackberry Bushes are best suited for planting in USDA Zones 4 to 9.

Can Arapaho Blackberries be grown in pots?

Yes, Arapaho Blackberries can be grown in containers. Choose a pot that is 3 gallons or larger with drainage holes. Be sure the plant gets as much light as possible each day

Arapaho Blackberries are resistant to many pests. Birds and other wildlife enjoy eating blackberries and some precautions can be taken, such as fencing or nets, to reduce damage to crops by foragers.

Arapaho Blackberries are not evergreen, but deciduous. The plants go dormant and drop foilage in winter months.